JACKS in Ireland continues as we turn our attention to the capital city, Dublin. Forbidden Fruit takes over the city this June Bank Holiday Weekend.

On the grounds of the Royal Hospital in Kilmainham, Forbidden Fruit will host a stunning line-up that caters to all music fans. Entering it’s eighth year, the festival has continued to grow and are adding more stages this year.

Headed to Forbidden Fruit this summer; Brooklyn indie-stalwarts Grizzly Bear, Four Tet, Warpaint, Glass Animals and more. The festival isn’t holding back with it’s headliners either as Justice and Bonobo close out the Saturday and Sunday night. Bringing the curtains down on Forbidden Fruit on the Monday are The War on Drugs.

The festival is creating a fusion of all genres, giving festival-goers the opportunity to see what they already love and discover something new. This morning the organisers hit us with their second wave of acts heading to Dublin in June. Adding more diversity to its line-up, Dublin singer Loah will be bringing her soulful Haitian sound to Kilmainham.

While polar opposites of the songstress, French heavy metal band Novelist will be performing. If that weren’t enough to show there’s something for everyone, LA rapper Earl Sweatshirt, will also be showcasing his incredible songwriting abilities.

Check out the line-up so far in the poster below. 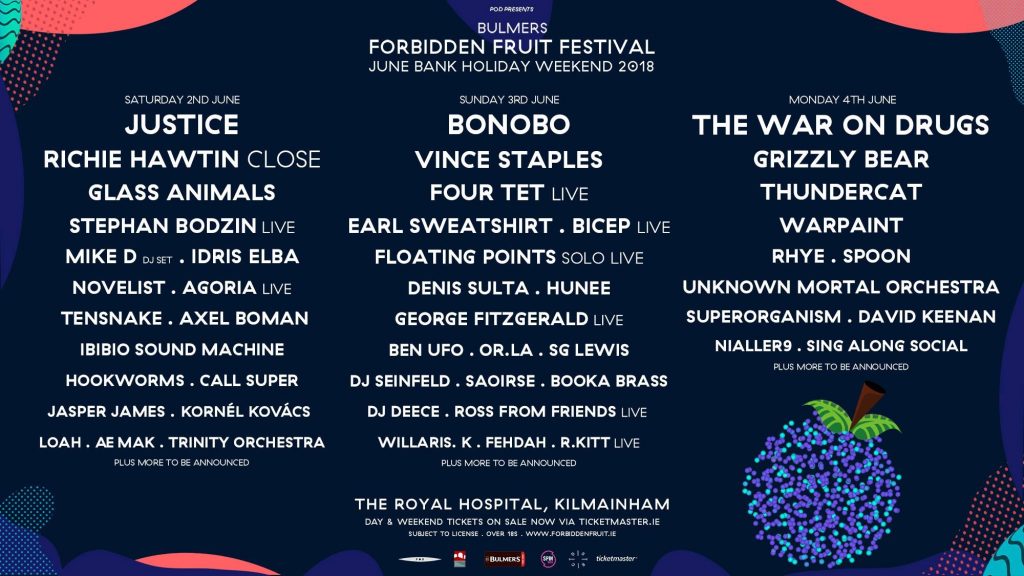 Forbidden Fruit doesn’t end when the headline act walks off the stage though. For those attending, the festivities continue late into the night with official afterparties across Dublin City centre. Although it’s not announced who’ll be playing at these events or what venues will be involved yet, it means the fun will be carrying on late into the night.

In previous years, the festival has seen the likes of Bon Iver, Dizzee Rascal, Kasabian, New Order and Wu Tang Clan all perform.

Forbidden Fruit takes place across the June Bank Holiday Weekend from June 2nd to 4th. Tickets are on sale now, with full weekend tickets starting from €169.50.

Missed our first instalment of JACKS in Ireland? Fear not, we’ve got you covered!