Liverpool Calling is back! After three long years since, we can’t wait for it to begin. Here are six must-see bands across the weekend.

Why?: Gaining attention from all over the country, Avalanche Party’s sound is intense, thrilling and aggressive. Soaring riffs, sleek bass lines and pounding drums. If you’re feeling a mid-fest slump, they’re going to blow that weariness away. They’re a band who come to make noise, a statement and leave making you want so much more. Get excited to hear ‘Solid Gold’ and ‘Revolution’.

Where: Studio 2 on Parr Street

Life At The Arcade

Why?: Glittering indie-pop/rock that are going to make the hairs on your arms stand up. With uplifting melodies and beats that’ll make you want to bounce along too, Life At The Arcade are an exciting band that’ll warm your heart. They perform with their heart on their sleeves and with songs like ‘Tied Up’ and ‘Obsessed’, you won’t be disappointed with the local lads.

Why?: A bit grunge, a bit rock, pure adrenaline rush. Heavy guitar riffs, tension building drums and while there’s an intensity to their songs, they’re just so much fun to thrash around too. They don’t mess around, Takotsubo Men are a band that’ll hit you with a high tempo and rock that’ll keep you on edge and wanting more. Not a bad way to gear you up for the headliner you choose to see.

Where: Studio 2 on Parr Street

Check out the stage times in full for Friday below:

Why?: The north-west Londoner comes to Liverpool singing about life today but with a sound from the 60s. A voice that’ll turn heads, she sings about love, life and living in the big smoke. What’s an added bonus is the ska/jazzy sound when she sings with her band backing her, bouncing bass, uplifting trumpets and plenty of opportunities to get up and dance with the other half.

Where: The Observatory (Constellations)

Why?: Fast riffs, hard-hitting messages to their songs and just overall quality rock. One of Sheffield’s finest, they emit an infectious sound that riles you up like during ‘Mind Pollution’. Whirlwind melodies that are driven by thrilling guitars and latest single ‘Shock Machine’ instilled assurance that SHEAFS are a band destined for big things. Catch them on Saturday, they’re guaranteed to be one of the highlights of the weekend.

Why?: These moody lads are going to set you up for Pulled Apart By Horses in the best way possible. Echoing hooks and quality beats one moment and brooding and rumbling melodies the next. They’re a band that can be psychedelic and thrilling. Be prepared to get sucked in when ‘Fragile Male’ begins.

Check out the stage times in full for Saturday below:

Liverpool Calling kicks off at 5pm in Phase One when High Rips get things under way. It’s been a long wait but it’s back and it’s bigger and better, if you haven’t got a ticket yet, head over to Skiddle and get your ticket now! 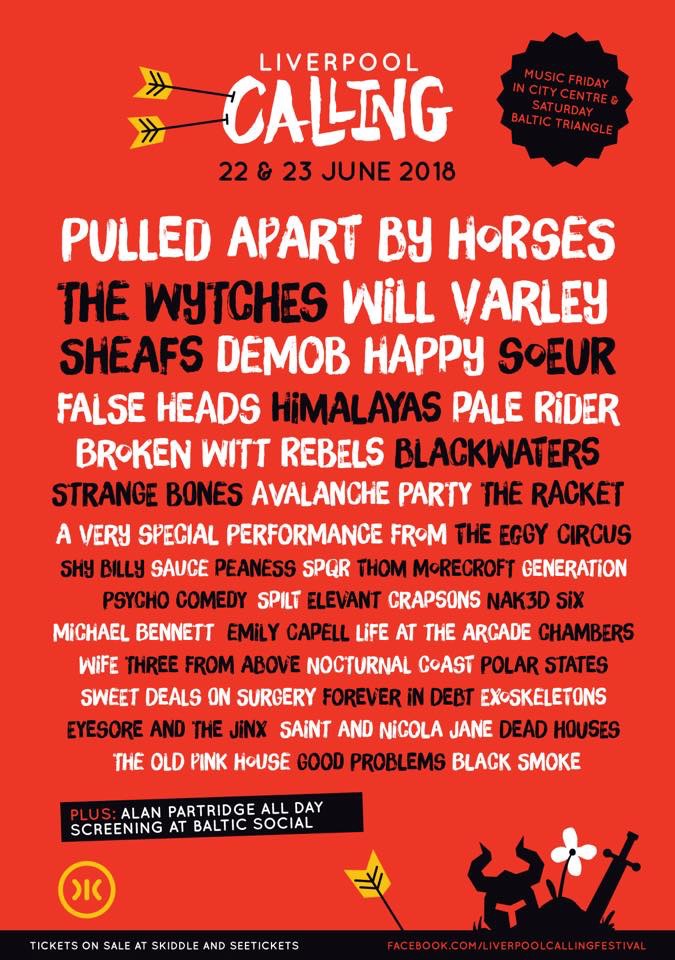 If on the day, get to Phase One on Friday. If you can’t then catch the thrilling line up of day two and get your ticket from Constellations.