Auction For The Promise Club have released their debut album, Silence and we’ve been listening to see how the Cornwall trio’s first effort has turned out. 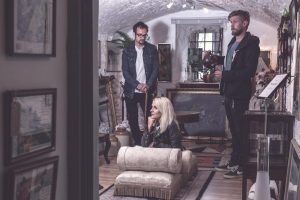 Auction For The Promise Club have been building up to the release of Silence for some time now, teasing with singles, ‘This May Hurt‘, ‘Moonlight‘ and ‘See Through‘. What they kept secret so well though, is that was just a small sample of what was to come.

Silence is littered with power-driven anthems that really captivate the listener. The title track, which opens the album is a stunning song with it’s long instrumental at the start. The way it’s executed is like when you feel that there’s a storm coming, with 64-bit like sounds and guitars being plucked and readied. The thunder arrives in the form of a military-style beat of drums. Then crashing symbols and soaring guitars accompanied with heavy bass opens the flood gates and suddenly you’re swarmed by an exciting instrumental building to the beginning of this song’s story.

Frontwoman Zoe White Chambers, takes over and with her delicate voice proceeds to sing about being drowned in silence. It’s an emphatic start to the record.

Across Silence, they produce such powerful tracks that all draw you in with their soaring guitars, quirky drum beats and heavy bass lines.

There’s one moment on the album when you think this trend is broken temporarily. On ‘Ghosts‘, its haunting atmosphere makes you take a step back and listen to Chambers sing about her demons and trying to escape from them. With the echo on the bridge, you really sense the anxiety within the track.

Then unexpectedly, drums slowly rise and suddenly an explosion of sound, almost like her ghosts are being exorcised from her. Similar to Wolf Alice’s ‘Swallowtail‘ but more intense. It’s a powerful song that leaves you with a harrowing feeling as it concludes.

Silence is a record made to be heard live and they’ll sound great in those gritty, darkly-lit venues where they’ll fit in so well with the vibe those places give.

They’ve been compared to the likes of Muse and the Banshees. Their hard-hitting and angst filled tracks really show that, especially on lead single, ‘This May Hurt‘, with a similar set up to Muse’s ‘Micro Cuts‘.

Through all the intensity of the album, there are moments where Auction For The Promise Club change direction and able to show they’re not a one trick pony. On ‘Dancer‘, drummer Toby White Chambers, really shines through with a fun drumbeat as Zoe sings throughout about letting go and moving forward to better things.

There’s the love-smitten moment on ‘Cut So Close‘ with its pop-punk playful sound to it and bouncing beat that draws comparison to Brody Dalle. As White sings about missed signals and vulnerability; “You cut so fine, you send shivers down my spine… You were cupid with an arrow… But it’s you there, with a hammer… Thought you were blowin’ me a kiss but you always seem to miss”. The quirky lyrics are a breath of fresh air to the heavier songs and it’s one to enjoy while bouncing around to.

As we mentioned, they pull away from their harder hitting tracks on the rare occasions. The final track on the album is another one of those times and it’s a surreal and enchanting moment. ‘Mexico‘ is like a lullaby crafted by The XX and then reshaped by Auction For The Promise Club.

Closing the record, its a comedown from the adrenaline rushing rock before it. Chambers sings about longing for the blue skies of Mexico and to escape from the stresses of everyday life. ‘Mexico‘ is hypnotic as it gently carries you to the end of Silence.

Overall it’s a lively album that leaves you wanting more. Auction For The Promise Club show that not all albums have to rise and fall, with non-stop intense rock. The only time it diverts completely from its hard-hitting rock is to close the album out with ‘Mexico‘. Silence is an album made to be heard loud and when the opportunity presents itself, live too.

Songs worth putting on repeat: ‘Silence‘, ‘Dancer‘, ‘Ghosts‘, ‘Cut So Close‘ and ‘Mexico‘.

We caught up with Auction For The Promise Club guitarist, Perran Tremewan back in April about their single, ‘Moonlight‘, Record Store Day and new album, Silence. Click here to read what he had to say.