Hope & Glory unveil where to catch each band at this years festival and set to donate all profits to the ‘We Love Manchester’ campaign.

Hope & Glory Festival will take over St. George’s Quarter at the beginning of August with a thrilling line-up. Tickets are on sale and in the wake of last month’s attack in Manchester, organisers said they’ll donate all profits from ticket sales to ‘We Love Manchester’.

‘We Love Manchester’ was set up by the British Red Cross to help the families of the 22 who died and those who were injured. The charity have already raised over £10 million, with £2 million of that being raised during Ariana Grande’s benefit concert in Manchester on Sunday.

Festival promoter, Lee O’Hanlon said: “I have lost count the number of times I have attended shows at Manchester Arena for professional purposes and personal enjoyment. I attended the vigil the following night in Albert Square and then attended the Simple Minds concert in Manchester that same night. I was moved like I never have been before. The defiance and strength the people of Manchester showed that night and in the days after the attack was the most powerful thing I have ever experienced. The images of children and young parents broke my heart so goodness knows what the families are going through. I can’t begin to imagine.

I just want us to be able to support the friends and families of those injured or who lost their lives as well as the emergency services that supported them, in any way we could. As a North West Festival with two Manchester artists as our headliners, the choice was simple. It’s simply doing what we can, standing with Manchester. These people want to change our way of lives. I grew up on the music of the North West. These people are strong and if we can help them a little then we will.”

A big part near the end of the ‘Madchester’ scene James, will be headlining the festival, alongside the Hacienda classical, fronted by Happy Mondays singer, Shaun Ryder.

Also amongst the line-up, local acts The Jackobins and Clean Cut Kid will be performing across the weekend of August 5th.

The festival has revealed where you can catch each act across the weekend with the stage breakdowns. St. George’s Square will have two stages, with over 100 artists scheduled to play.

Below is the full line-up and stage breakdown for Hope & Glory Festival:

Tickets for the festival are on sale now via the Hope & Glory Festival website. 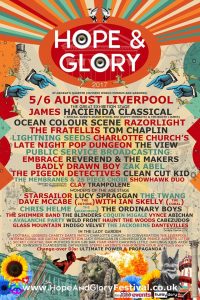