Only two weeks until Hope and Glory Festival debuts in Liverpool and they’re still adding more acts to it’s line-up. 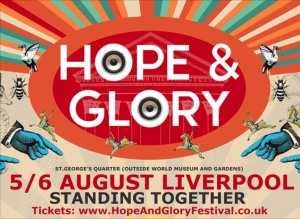 Hope and Glory will take over St. George’s Quarter on August 5 and 6, with a stellar line-up of bands from the past and present. While organisers released their stage breakdown on Thursday evening, they also revealed even more artists set to perform at the festival.

The festival already boasts headliners in James on Saturday night and the Hacienda Classical, featuring Happy Mondays’ Shaun Ryder on Sunday. Along with history tellers through rock and synthesizers Public Service Broadcasting, whose third album Every Valley, entered the charts at number four.

Also on the line-up are rockers The Fratellis, as well as local lads Clean Cut Kid, who released their debut album Felt in April. Other local band and ones to watch out for, The Jackobins will be performing on the Wonders of the Age Stage on the Saturday.

Joining the party in August, Liverpool band Space will be headlining the In The Lady Garden Stage on Sunday. Also added to the line-up are Rale, Rich Ayre, We Are Catchers and the electrifying Sex Pissed Dolls, who’ll be joined by the legendary Tony Christie for a unique rendition of ‘Amarillo‘.

The five acts join the likes of Ocean Colour Scene, Razorlight, The Lightning Seeds and Embrace, who just finished supporting long-time friends Coldplay. Organisers claim to have revealed their full line-up but continue to tease there’ll be plenty of surprise performances across the weekend too.

Charlotte Church and Lucy Spraggan will sit down with music journalist and author Simon Price for an ‘In Conversation With…’. Fans will be given a chance to get an insight into the two respected artists careers.

While bands perform on stage, festival-goers can show off their skills in an air guitar competition on the Saturday. Those who want to take part should email hello@tinyCOW.co.uk with their name, age and top three songs they want to rock out to.

From charity football matches to Victorian fancy dress competitions, exciting music to foam parties, Hope and Glory have planned a thrilling weekend to kick off the final month of summer. Tickets are still on sale and all sales are being donated to families of those who suffered from the Manchester Attacks last month.

Tickets are available from the Hope and Glory website, visit www.hopeandglory.co.uk/buy-tickets. Check out the stage breakdown for the weekend, below. 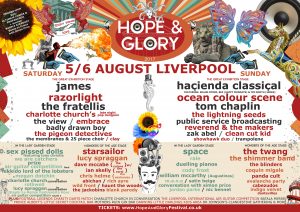