The Libertines are going all over the country this year and have now added a stop across the Mersey to play in Tranmere’s Prenton Park.

Wirral Live have already announced that The Madness will be filling up Prenton Park with nostalgia, along with The Farm on May 19th but this morning on Wirral Radio, the hosts unveiled that on the 20th, we can expect an excellent line up of good, old fashioned rock n roll.

The Libertines will be taking a trip across the Mersey to headline the second day of Wirral Live. Making the Saturday even more unmissable, local lads, The Coral, who headlined Sound City last year and Sheffield natives, Reverend and the Makers will be coming along for support too.

Carl Barat was only recently announced to be hitting up Sound City on May 27th with his band Carl Barat & The Jackals but now there’s a chance to catch him a week earlier with the band who he well and truly cemented his name into indie folklore with. 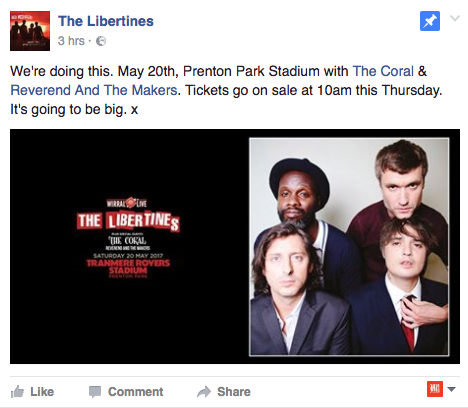 Tickets are due to go on sale this Thursday (Feb 9th) at 10am but there’s an exclusive pre-sale for Tranmere Rovers seasons ticket holders tomorrow (8th) also at 10am. Both the pre-sale and general sale are available through See Tickets and Wirral Live’s website.

With three bands that all defined a genre for several generations, Wirral Live have put together what’s sure to be a day to remember in just three months time.