The Wombats return with Beautiful People Will Ruin Your Life, our verdict is in on the follow up to 2015’s Glitterbug. 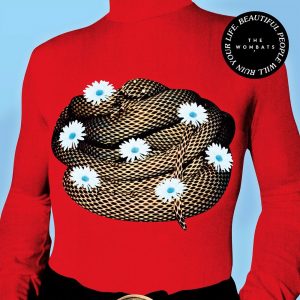 Beautiful People Will Ruin Your Life sees The Wombats take a new approach to the sound we’ve come to love them for. Opening with ‘Cheetah Tongue’, its soft riffs are hypnotic, while frontman Matt Murphy continues to provide vividly descriptive lyrics. His ability to make something ordinary sound so lucrative is a testimony to his songwriting skills.

This is a theme that reoccurs throughout the record. Their sound has never sounded so good, all so easy on the ears and smooth. It’s not the same as previous records, filled with fast guitars and failed relationships. There’s more a self-reflective angle on this record with a stunning melody accompanied on nearly every track.

Murphy’s lyrics are still strong and detailed as ever, with lines such as “go ahead baby, lets get blind tonight… I’ll hold your head back and you can hold mine” on ‘Lethal Combination’. While we mentioned there’s more a self-reflecting outlook on this record, he still sings about going out and having fun and letting go, in his own unique way.

The Wombats have an ability to mislead you with an uplifting composition but then when Murphy starts singing, his dark outlook at times can throw you off. They keep this trend going with ‘I Only Wear Black’. Cheery piano behind his voice, Murphy sings about his time in a rainy LA, wearing only black to match his feelings; “I only wear black… Spring in my step, knife in my back… It’s just what I’m like, I keep it locked up inside… Pills in my pocket, head in the sky…”

A welcomed throwback to the 60s with a groovy melody and slick beat on ‘Dip You In Honey’. It’s a fun and uplifting moment on the album and another standout moment that shows how great they’ve developed their sound.

They’ve never sounded so good with stunning hooks and pleasing beats. Matt Murphy’s songwriting is still at the top of its game too. It’s a spectacular return from the Liverpool band.

Last summer The Wombats celebrated their debut album A Guide To Love, Loss and Desperation, turning 10 and you can see they’ve matured in that time and still sound just as good.

Songs worth putting on repeat: ‘Turn’, ‘Dip You In Honey’ and ‘I Don’t Know Why I Like You but I Do’

Beautiful People Will Ruin Your Life by The Wombats is out now.

One thought on “Review: The Wombats – Beautiful People Will Ruin Your Life”