Liverpool band Bribes, have released their video for latest single of their debut EP and title track, ‘She Sings Blues‘. 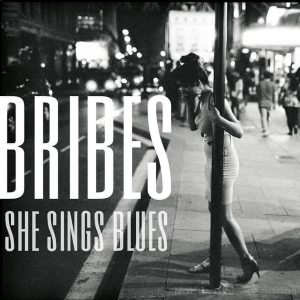 The trio released their EP at the start of the summer, featuring five tracks showcasing why they’re one of Liverpool’s loudest bands around. ‘She Sings Blues‘ is Bribes first video and don’t disappoint with an in-your-face style of rock and psychedelic visuals shot mostly in black and white.

Flirting with danger throughout, Bribes frontman Gary Wilson sings about standing his ground when confronted; “If you don’t step back down, a big storm is comin’“. There’s moments throughout where you listen and think “this will sound great live”, especially during the intense instrumental at the halfway mark that sees the tension build and eventually boil over.

The band come across as intimidating in the video while they perform the track, pushing the general vibe of ‘She Sings Blues‘ even more. Each member play on their own while in front of a screen projecting somewhat psychedelic images. Adding to the atmosphere of the song, the video is shot for the most part in black and white, briefly changing to colour on the first chorus.

‘She Sings Blues‘ is reminiscent of Queens of the Stone Age where it’s filled with an edgy sound and has all the right qualities for a great rock song that should sound just as good live as it does on the video.

Check out the video for ‘She Sings Blues‘ by Bribes below.