Frightened Rabbit have took a moment out of their US tour to release new song ‘Fields of Wheat‘ in response to the recent General Election. 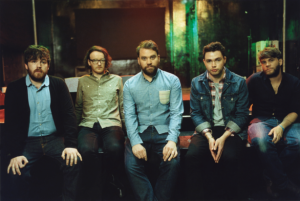 Frightened Rabbit are currently touring in America in support of their latest album Painting of a Panic Attack. The Scottish indie rockers may be on the other side of the globe but like many, they’ve been captivated by the General Election.

The snap election has seen the support of the Labour party and its leader, Jeremy Corbyn increase dramatically. While the Conservatives and Theresa May narrowly came out on top in the election, it has ignited many 18 to 25 year-olds to become politically active. It’s believed that there was a 75% turnout by the youngest age demographic.

A lot of musicians spoke out, showing their support for the Labour party and urging people to vote. The outcome resulted in a hung parliament with the Conservative’s forming a coalition with Northern Irish party the DUP.

The coalition has raised a lot of concerns for Labour supporters and others across Britain and Frightened Rabbit have now “responded” through a new song about the result of the election.

‘Fields of Wheat‘ is a delicate song, with just frontman Scott Hutchinson and his acoustic guitar. Singing about greed, poverty and other political issues. Hutchinson repeats throughout that this song isn’t just about him. The harrowing song raises concerns that many people share about the outcome and their uncertainty of the countries future.

The band shared the track on Soundcloud saying: “We made this today. It felt like the song should go out now, because it’s about what’s happening now, it’s about where we live and if we waited too long the sentiment could go stale. We don’t want to be too descriptive or conclusive here, our only hope is that you listen, enjoy and share it.”

Listen to ‘Fields of Wheat‘ below.