Liverpool Sound City returned to celebrate it’s 10th birthday, so we went down on the final day to check out the party celebrations. 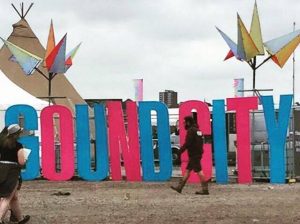 It’s Liverpool’s landmark festival and now 10 years old, Sound City made sure it was its best year yet. With John Cale, The Velvet Underground and Metronomy already making the Bank Holiday Weekend one to remember, we had finally reached the final day.

Sound City takes place on the May Bank Holiday each year, which sees people flock from all over the country to attend. So it was baffling to see that the city was also playing host to a marathon through the city on the same weekend, causing many road closures and making it awkward to get down to Clarence Docks.

Luckily we didn’t miss any of the action and got there in time to catch Skeleton Key open up the Cavern Club Stage. In what was one of their first proper gigs, they had a small crowd to take in the moment. With a psychedelic vibe to their sound, it was an uplifting way to start the final day of Sound City.

Down on the Atlantic Stage, where headliners, The Kooks would later play, Red Rum Club were in the thick of an explosive performance. With a loud mix of bass, trumpet and guitar driven anthems, it was a perfect moment as the sun finally began to appear over Clarence Docks.

Tim Burgess had his own marquee this year, bringing his Tim Peaks Diner to the festival. Our first visit to the diner was to catch Fandjango. In the beginning the marquee was fairly open but by the end there was hardly room near the front to move. Fandjango’s extremely fun and unique set drew people in as they played cover after cover that created one big sing-a-long.

With hits like Arctic Monkeys ‘When The Sun Goes Down‘, Pussycat Dolls ‘Buttons‘ and Offspring’s ‘Give It To Me Baby‘ all raising smiles on the crowds faces. By the end there wasn’t a single person in the marquee who wasn’t standing still or not singing along. Fandjango were definitely a surprising highlight of the day.

Next up we crossed over to the Baltic Stage to catch one of the highly anticipated acts of the day, Judas. With massive instrumentals and powerful lyrics, it was an electrifying performance from the London quartet. They gripped the audience from the strike of the first chord, down to the last. The whole set up made for a great set, as the light show really helped add to the thrill of the performance and the sheer intensity of Judas’ music.

Returning back to the Atlantic Stage, it was Cabbage’s turn to take the spotlight. Politically driven as the drum’s base had a clear message; “VOTE LABOUR” and opening with title track of their EP, ‘Necroflat In The Palace‘ that saw frontman, Lee Broadbent chant “I was born in the NHS, I wanna die in the NHS!” The thrilling set was filled with political statements as they went through tracks of their latest EP.

One band that was a must-see for us this year at Sound City were local lads, The Jackobins, who played on the Baltic Stage. Hotly tipped as ones to watch by many, The Jackobins took the festival by storm and showed exactly why.

The energetic performance was one of those for people to look back on and say “I was there”. A thoroughly enjoyable gig from the locals, who’s emphatic positive energy seeped into the audience and made it a show that got everyone lost in the moment. The Jackobins recently released their new single, ‘Nightfire‘, which got aired out and even though it already sounds good on record, the live version is captivating as it races to that peak and erupts into a surreal combination of synths and fast guitars.

Overwhelmed by the end, frontman, Dominic Bassnett stormed off the stage as the band played out the rest of the set and before you knew it, guitarist, Veso was dumping his guitar and leaving the stage too. The energy from The Jackobins was great and it was a great moment half way through the day at Sound City.

From one local band to another, The Sherlocks was up next for JACKS as we headed back to the Atlantic Stage. The band are counting down the days until the release of their long-awaited debut album, Live For The Moment. Drawing one of the biggest crowds of the day to the main stage, they made the most of their slot, as they took us on a rollercoaster of emotions. We were treated to a variety of songs, featuring b-sides such as the heart-wrenching ‘Emily‘ and tracks from the forthcoming album. What their performance showed to us is that August 18th can’t come quick enough, when Living For The Moment is released.

The Sherlocks and The Jackobins were both proof that the music scene in Liverpool is still thriving with exciting talent.

In the evening, Tim Peaks Diner was being taken over by yet another local group, Bribes. When you release your debut EP, there’s not many better ways to celebrate than go to Sound City and show it off to the festival-goers. Bribes released their debut EP, She Sings Blues on Friday 26th. Filled with heavy riffs and angsty rock, it was an exciting and energetic set from the trio. It was a nice moment from bass player, Jon Dillon to thank those for coming to see them. Pointing out how it’s a difficult time for the country in the wake of last week’s bombing in Manchester.

The Vryll Society had arrived on the Baltic Stage to a great reception. Entertaining Sound City attenders with sounds akin to 90s indie rockers, Mercury Rev. As they rolled through their set, their ability to induce the audience into a trance with their catchy hooks and impressive singing was a pleasure to watch.

The legend and host of the diner, Tim Burgess played an intimate set with Mark Collins in Tim Peaks

Diner. As the duo played acoustic versions of classic and recent Charlatans tracks. The marquee was rammed for Burgess intimate performance and the big smile on the Charlatans singer’s face was proof that he was loving it. With songs like ‘Country Boy‘ and ‘Plastic Machinery‘, there were big sing-a-longs throughout. Strolling around the stage, high-fiving and shaking hands during the half hour performance, the nicest moment probably came when it was pointed out a fan was celebrating his 30th, to which Tim got the crowd to give a round of applause for.

As the end to another Sound City approached, the night was ending in spectacular fashion with White Lies blowing away the crowd at the Atlantic Stage. Until November, it had been seven years since the band had played in Liverpool and now it had been twice in six months. Clearly making up for lost time, the London trio treated us to a career-spanning set with their huge anthems. Frontman, Harry McVeigh was lapping up his opportunity to be on the main stage and back on Merseyside, making it known that he loves returning to the city.

As expected, huge sing-a-longs came when ‘Death‘, ‘To Lose My Life‘ and ‘Big TV‘ lit up Sound City. The biggest moment of the set arrived at the end with a fantastic rendition of ‘Bigger Than Us‘ closing out the set, which was dedicated to those affected in the Manchester attack last week.

Once White Lies had finished, before the roadies began to set up the stage for headliners, The Kooks, the mayors of Liverpool and Manchester, Steve Rotherham and Andy Burnham came on stage. In a special moment where music was set aside, both mayors paid tribute to those who lost their lives in Manchester and thanked the people of Liverpool for the incredible support and solidarity they’ve shown. As Mayor Andy Burnham said “We’re gonna stand together and together we will defeat this” before a minutes silence was held.

After the poignant tribute, a brief chant of Labour leader, Jeremy Corbyn’s name broke out, it was then followed up by a spine-tingling rendition by the crowd of Oasis hit ‘Don’t Look Back In Anger‘.

Finally, the time came for headliners, The Kooks to bring the 1oth birthday celebrations to a close. A rowdy crowd were in fine form as the band took us on a journey through their back-catalogue. The Kooks gave a performance to remember as they reeled back the years during their electrifying set. With roaring guitars and huge sing-a-longs, the band were clearly loving their time on stage as the positivity bounced back and forth between band and crowd.

As you’d expect, the crowd went wild as the classics played, with ‘She Moves In Her Own Way‘, ‘Shine On‘ and ‘Always Where I Need To Be‘ getting euphoric reactions from the Sound City fans. Even when they stripped it back and played ‘Seaside‘, there wasn’t a moment where the performance lulled. Decorating the dockland with confetti and soundtracking the night with a classic-laden set, it was a perfect end to the night as they closed with ‘Naïve‘ from the debut album Inside In/Inside Out.

The final day of Sound City 2017 was filled with many great moments and passionate performances across the day. Now a decade old and many memories created, after the way the milestone was celebrated this year, we can’t wait to go back in 2018 to do it all again.