Sound City hit us with their second wave of acts heading to Clarence Dock this May and they haven’t disappointed.

Liverpool’s premiere festival unveiled that legendary The Cribs will be heading to Merseyside, joining headliners The Velvet Underground, Metronomy and White Lies. With six albums under their belt, The Cribs will be giving a one-off performance of their iconic third record Men’s Needs, Women’s Needs, Whatever. Celebrating 15 years as one of the best indie bands around.

Also announced in the latest additions to the line-up, are four-piece rockers The Amazons, who continue to grow since hitting the scene last year, expect an exciting show with new music from one of 2017’s hotly tipped bands.

Recently dropping their first record, Dumb Blood, Vant will be returning to Liverpool, bringing their thrilling live performance to the docks, making it a set not to miss. If you need a taste of just why they’ll be one of the best bands of the weekend, read our album review of Dumb Blood by clicking here.

On a continuous rise, Declan McKenna is also set to play at Sound City. Having won the prestigious Emerging Talent Competition at 2015’s Glastonbury Festival and his first LP set to be released this May. It’s a perfect opportunity to catch an artist who’s got a very bright future ahead.

Bestowed the title of Best Festival for Emerging Talent, Sound City will continue to live up to said title, as they’ve added several unsigned artists from Merseyside and Greater Manchester to the bill. Up and coming acts to look out for this May include Queen Zee & The Sasstones, Shrinking Minds, Oranj Son and Ali Horn.

Recently expanded over to the UK, setting up shop in Liverpool, Chinese record label, Modern Sky will be showcasing some of their talent with Catholic Action, PIXEY, Violet Youth and FUSS as well as overseas artists Cotillon (New York) and Re-TROS (Beijing).

The arts and culture line-up is being headed by avant rock legend, John Cale, who’ll be performing with The Velvet Underground on the Friday night. Cale will be giving a talk on the early years of his career, life in the US, his friendship with Lou Reed and the direction his music has taken and where it can still lead. 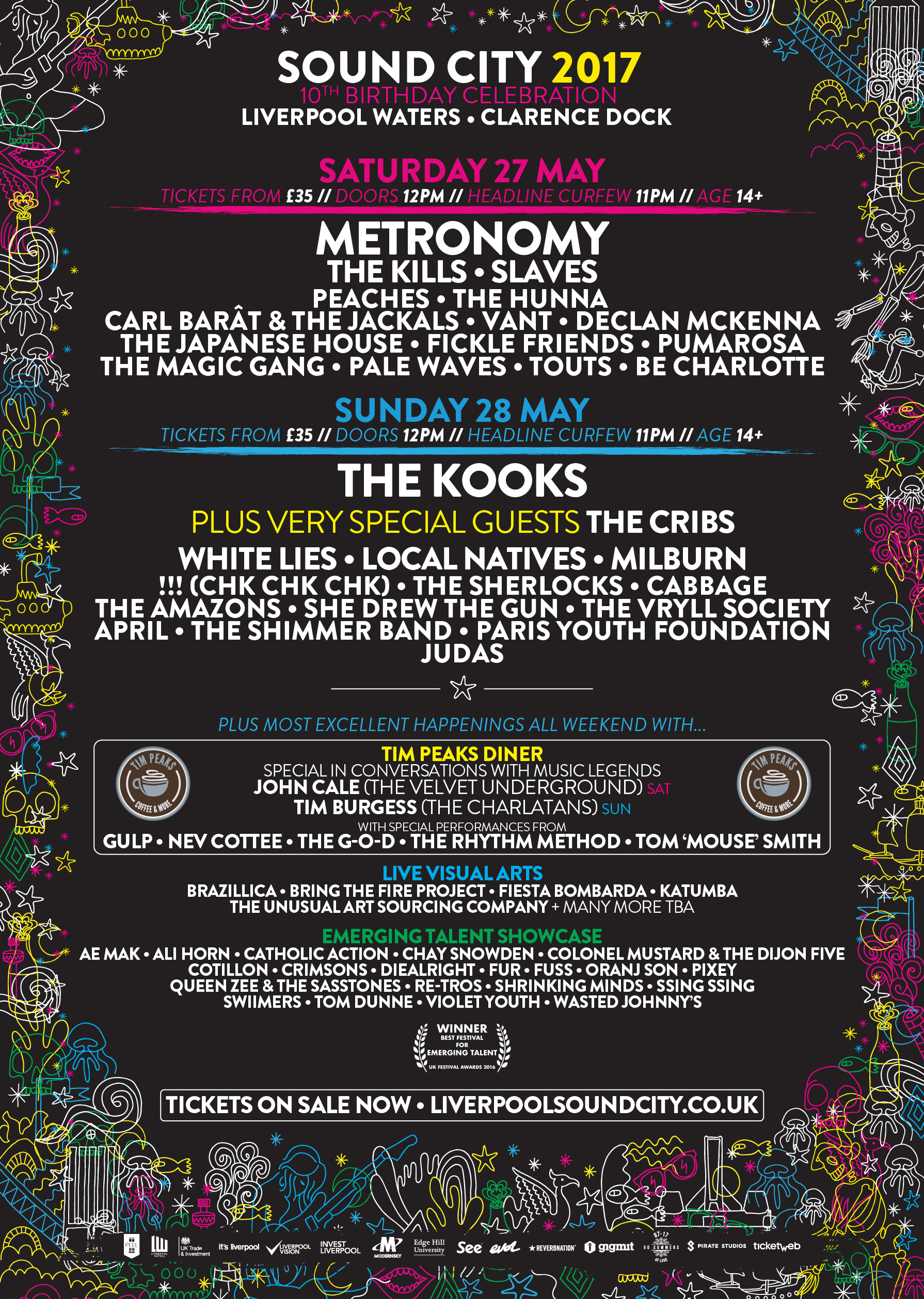 Joining him will be Charlatans frontman, Tim Burgess, giving a talk on his fascinating 30-year career about his life in one of the genre-defining bands around, for anyone even remotely interested in the history of not just indie but music in general, will not want to miss this.

Burgess will be celebrating his third year with his coffee at Sound City, Tim Peaks Coffee, returning to appease the crowds who need a pick-me-up to shake off the hangover from the night before with a side of emerging talent. Heading to the coffee shack this year, The Rhythm Method, Gulp featuring Super Furries’ Guto Price and youngster Tom Mouse Smith. Alongside them will be The G-O-D, Nev Cottee with some very special guests to be revealed over the weekend.

Music set aside, Rio will come to Liverpool as Brazilica Festival and Fiesta Bombarda will combine to bring a party to Sound City like no other. Local Brazilian drumming ensemble, Katumba will also be bringing samba to the festival while collaborating with the Bring The Fire Project, pairing up fire with favela beats, surely being an event that’ll leave many people talking about, long after Sound City comes to an end this year.

With Sound City+ at the Camp and Furnace already enticing people for this year’s festivities and all the music on the line-up, Sound City is celebrating it’s tenth birthday in spectacular style. Tickets are on sale now and with many more acts still to be announced. Get your tickets for the festival by clicking here.