Voyages have released their debut EP New Years Day, giving us a blast from the past with their captivating first effort. 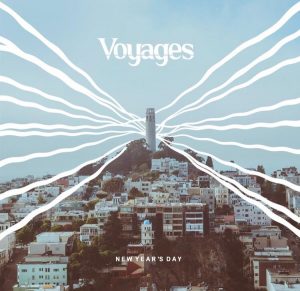 The five-track EP is something the band have taken their time with, showcasing it on stage under pseudonyms while they fine tuned their sound. Now a month on since it’s digital release and only days away from releasing the New Years Day EP on vinyl, Voyages have shown why good things do come to those who wait.

Opening with the self-titled track, ‘New Years Day’ immediately creates a vibe akin to Foster The People’s hit ‘Pumped Up Kicks’. Their nod to 60s pop-rock is refreshing and the vocals of Will Walter adds to it, sounding like a young Paul McCartney. A song that uplifts and screams at you that your goals aren’t out of reach, ignoring the doubters and invoking hope that this new year can be your year.

The Bath-based band played their first show outside of their hometown under their true name in Liverpool last month at District. While the EP was only a few days old at the time, people absorbed it like it was always a part of them, it was an infectious sound.

So hearing these songs that weren’t in an old warehouse in Liverpool’s Baltic Triangle on a cold December’s night was refreshing and truly showed the warmth of this band’s music. They’re only at the beginning yet they leave you already wanting more.

They know just how to mix the old with the new and it’s perfectly demonstrated on ‘Schmuck’. Their music is like a wine-tasting session, you take a sniff and find a familiarity about it, then you have a taste and let it sit with you as it’s flavour unfolds. Then just like a good wine, after your taste you want the bottle.

With ‘Schmuck’ at first you think it’s similar to Brooklyn band Grizzly Bear but as it progresses with its sharp riffs and a hypnotic beat, the song makes you want more. It’s psych-rock is captivating and truly proves to be a stand-out point on the EP.

Another must-hear moment on the New Years Day EP is ‘Godspeed’. It’s lullaby atmosphere is comforting as Walter gives reassurance that it’s ok to make mistakes; “you don’t have to be right all the time cos you’re alright just the way you are… make mistakes, keep on singing”. The comforting words backed with a dreamy composition is a delightful formula for a beautiful track.

New Years Day EP has an ability to take you on a journey between the glory days of 60s pop and modern-day indie. One minute Voyages will draw you in with one track like ‘I’m So Scared of Losing That I Fail To Even Start’, before spitting you back out and have you dancing hypnotically to the likes of ‘Schmuck’. It’s those kind of diverse talents that Voyages already have that’ll make them a band to keep an eye on as 2018 unfolds.

Songs worth putting on repeat: ‘Schmuck’ and ‘Godspeed’

New Years Day EP by Voyages is out now and available on vinyl from January 7th.