One of Deltasonic Records brightest prospects God on my Right, have released their debut EP, SWALLOW. 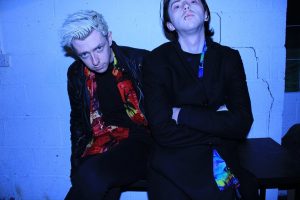 Opening with ‘Not so Young’, it captivates you almost immediately with dreamy vocals carrying you away into a trance while frontman Sean Hollywood, sings about accepting younger days being behind him.

‘Kneel Down’ hits with a heavier tension than its predecessor, with a filthy bass line and a brief rap from Hollywood, an intense instrumental swarms around you and angrily drags you to its finish line.

One of the EP’s highlights is ‘Blood Sport’, with a gothic feel to it as the electronic sounds invoke a dream-like state before being snapped with an up in the tempo. Sean sings with a falsetto, which feels like the final stroke of the brush on this masterpiece. ‘Blood Sport’ is a work of art that progressively takes over you.

Closing out with ‘Sister Says’, there’s a style similar to Hurts. Once again, the combination of indie meets electronica is a match made in heaven. Emotionally charged guitars see the EP out but it’s the vocals that steal the spotlight, as the haunting atmosphere created showcases how talented God on my Right are. Despite the dark spirit of ‘Sister Says’, it ends SWALLOW EP on a high note.

The Hollywood brothers gorgeous combination of guitars and synths along with a dark soul should make them ones to watch in 2018. SWALLOW is a whirlwind EP that hypnotises you from the beginning that it’s a surprise when the trance breaks as the EP comes to an end. This EP is worthy of your time.

Songs worth putting on repeat: ‘Not so Young’ and ‘Blood Sport’