Here you can see all the upcoming gigs throughout September! 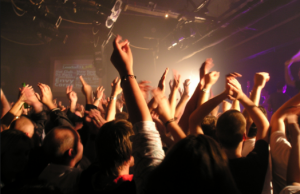 14/9 – Psych Fest Season: They Will Have To Kill Us First @ Picturehouse at FACT, Wood Street 6:15pm

A documentary directed by Johanna Schwartz about Islamic extremists banning music in Bali and how the musicians refuse to obey and fight against the extremist organisation for their right to sing. Featuring music from Khaira Arby, Fadimata Disco, Walet Oumar, Amkoullel, Moussa Sidi and Psych Fest headliners, SONGHOY BLUES.

A 70s thriller about undead frog worshipping bikers, terrorising innocent people across Walton-on-Thames. The film was recently restored by the BFI and was written by two blacklisted Americans and a psych-funk soundtrack to go with it put together by John Cameron. The film also holds the title of the last role that George Sanders would play.

This year’s festival kicks off the music side of things with New Jersey native Matt Mondanile’s Ducktails, with support coming from Ali Horn and rock outfit The Goa Express. This festival’s tagline is “This festival will destroy you” but if you ask us, there are a lot worse ways someone or something could destroy you.

From our preview back in February; “Topping the bill, stateside band, The Black Angels along with Mali outfit SONGHOY BLUES, providing a wide diversity of bands from around the globe. Psychedelia wouldn’t be so appreciated and recognised today if it weren’t for the input from The Black Angels, making it a highly anticipated set to see come the end of September. While co-headliners, SONGHOY BLUES will be gracing us with there presence for what will be a rare UK performance.”

1/9 – This Feeling Presents: The Americas w Life At The Arcade, Little Triggers and WEEKEND WARS 8pm

8/9 – Edge & Off Axis presents: We Were Glue w Three From Above and Kosmonauts 7pm

23/9 – The Zanzibar and Loyal to the People presents: The Bohos w Spinn, The Continental Phase, Arno and The Ruby Smoke 7:15pm

29/9 – This Feeling presents: SHEAFS w Himalayas, The Jjohns and The Mono LPs 8pm