Local lads, The Vryll Society have revealed they’ll be taking up a summer residency at The Magnet, with three gigs featuring plenty of local bands.

The Vryll Society announced through social media that they’re ready to go to the studio to record their debut album this summer. In doing so they plan to host three nights across the summer in The Magnet on Hardman Street.

The local lads plan to keep fans entertained with a series of shows in The Magnet, bringing plenty of Liverpool bands with them for support. The first show is pencilled in for June 30th with support from Samurai Kip, Wild Fruit Collective and Psycho Comedy.

Towards the end of the summer on August 25th, The Vryll Society’s second show will see The Msyterines, The Floormen and Strange Collective join the band on Hardman Street. Their summer residency at The Magnet concludes on September 29th.

Helping close out The Vryll Society’s stint on Hardman Street, Peach Fuzz, Bribes and Sugarmen will all play on the night before the main act. Hopefully throughout the summer residency The Vryll Society will showcase new material that’ll feature on their debut record.

They’ve been a band that have had a stronghold name in the grassroots of local music in Liverpool. It’s exciting times ahead for The Vryll Society and their series of shows, giving the opportunity for more up and coming artists from the city to shine too.

The band have teamed up with Evol to put on the gigs in The Magnet, helping pass the time as we wait for the first album from The Vryll Society.

Tickets are on sale now via SEE Tickets, Skiddle and Dice. 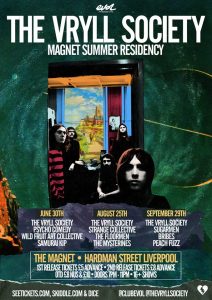