Norwegian trio, I See Rivers are readying their debut EP, Standing Barefoot, so we caught up with them for a chat in The Shipping Forecast. 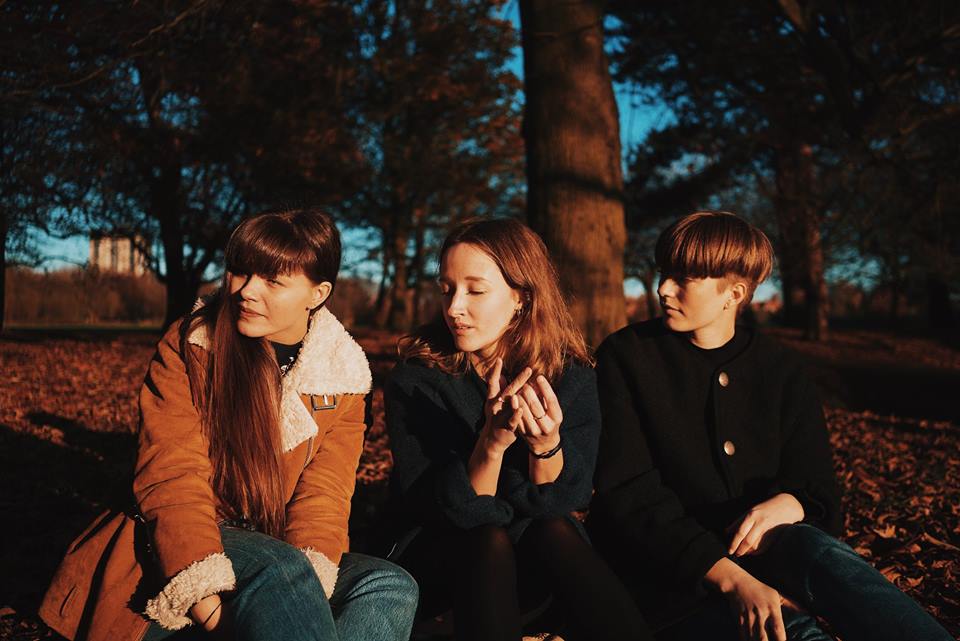 So your new single ‘Da Ram‘ is out now, what can you tell us about the track?

Lill Scheie – First of all, it was one of the first tracks we ever wrote together!

Eline Brun – They (Gøil and Lill) kinda started writing the record together before they asked me if I wanted to be a part of the band and I remember when I first came along and started writing together, you’d already started that song.

Gøril Nilsen – Yeah, we started it slightly, we’d written a bit of it…

Lill – We had written almost all of it, think we wrote the bridge together and some of the lyrics, so yeah, it was one of the first songs together.

So there’s a bit of all of you in there then!

It’s just under a month until your debut EP is released, what can we expect from Standing Barefoot?

Eline  – ‘Da Ram’ is one of the most fun tracks on the EP but we’d like to believe that there’s a bit of everything in the EP, so a bit more dark, maybe? Like a bit more down and then something in between there.

If that’s the case and there’s a bit of everything in there, cheeriness, sadness and all that, what kind of artists did you look to for inspiration?

Lill – We kinda listen to different types of music but we have a few artists that we all agree on! We listen to a lot of Fleet Foxes, Inge Bremnes and our favourite artist is Sufjan Stevens, have you heard of him?

Oh yeah, we love him! We saw him in New York in the summer! He’s just so whacky and zany!

Lill – A Really good friend of ours, did front of house for him for his Carrie and Lowell tour and when he told us that, we were dying!

Eline – “And you didn’t bring us!” It’s a dream to tour with Sufjan Stevens!

Speaking of live shows, you’ve got the 2ube Xtra Festival coming up, so for those that haven’t seen you live before, what can they expect to see?

Lill – We have a lot of fun on stage, so like, bouncing!

Eline – We have this thing were we move in time, our track, kind of flows a bit and shift at times and then Gøril would be like “showtime girls” and we’d be like a wave into the bridge.

It’s like a whole dance routine within the music itself?

Lill – Yeah, it’s a bit of everything, some super bouncy, some a bit more chilled out.

Eline – We kind of recreated our live show, and for people who haven’t seen us, it wouldn’t matter.

So it’s gonna be new for everyone then?

Eline – I don’t even know how to play it…

So when it comes to doing live shows or even when you’re writing or recording, what’s the process like to get ready for that? Is there something special you have in mind that you need to do to get ready?

Eline – Then again, if you’re gonna have a show and if the day isn’t feeling right, you kinda just have to make it right.

Lill – I have a story, we were on tour last year and it was one of the earlier shows and it was quite a big tour and we hadn’t played that kind of stage before so I was a bit nervous, so I had Inge [Bremnes] on my iPhone, trying to dance myself up to a braver level…

Lill – And I was so in to it and then I dropped my phone and it smashed!

Lill – But I was so in to it and was like “It’s ok! It still works! I can till get my tracks on them!” Then we came off stage and I looked at my phone and I thought, “friggin no! No!”

At the time it was just a problem for future you to worry about? Such a hard comedown!

So you’re all from different parts of Norway, how did I See Rivers come to be?

Gøril – We met in Liverpool and had all come to study music.

So it all just kind of fell into place?

How long have you been living in Liverpool now?

How are you finding life on Merseyside?

Lill – Very good! It is very different from Norway, I’m from Oslo, which is the capital of Norway, so I was used to the city but I never expected there to be like a cultural difference and I can’t really pinpoint what it is. So for the first few months, I was like “woah! Different, amazing but different”.

Have you picked up the accent at all?

Eline – “Gherkin!” At first, for like the first six months, we all thought, when we come to England, we know how to speak English and then I came to Liverpool and I was like “this isn’t English! What are they saying?”

So you knew English but you didn’t know Scouse?

Eline – Yeah but that was the main difference.

So four years of living here then, what’s your favourite thing about the city, have you got any favourite places?

Eline – I guess we all like nature, all the parks.

Lill – We actually went to the Wirral, last year and I can’t remember for the life of me what it’s called but it was a park, leading up a hill…

Gøril – You could see the sea from there…

Lill – There was a rock carved into the shape of a crocodile!

Eline – It was really beautiful, cos from here [Liverpool], you can’t really see the sea, just the Mersey river, there you could just see all of the ocean, mountains, it was just different, like just across the river, it’s so different and beautiful. Cos sometimes we miss the nature a lot.

Speaking of being from a different country, today, Theresa May has officially started the process of Brexit, so what are your thoughts on that? Considering you call the UK a home away from home, how do you feel about this?

Eline – Well obviously, we didn’t want that to happen but I guess it’s scary cos we don’t really know how it’ll affect us, up till now it hasn’t affected us but I hope we can call this our home for a long time.

Gøril – Whereas we were allowed to be here as long as we wanted, to work [and live, etc.]…

So now is it that you feel a bit more restricted?

So as musicians, do you think this could impact future talent coming here?

Gøril – Not just musicians but human beings in general.

Moving on! Record Store Day falls on April 22nd this year, the day after Standing Barefoot is released! Are you record collectors?

Eline – I really want to, not now and probably not by Record Store Day but I will!

Well if you could start your record collection now then, what would be the first vinyl you’d go for?

Eline – Hmm, I think I’d like Carrie and Lowell.

Lill – I’ll just agree on that.

So all agreed on Sufjan Stevens then, yeah? It’s a good choice! A good place to start!

Eline – We’ll start there and move on to more then!

Gøril – We listened to that on tour on vinyl, always a good start to the day, Coffee and Sufjan Stevens!

Record Store Day is a good time to get nostalgic, so thinking back to a time before MP3’s and streaming services, can you remember the first album you bought?

Eline – I Don’t think I bought my first record till I was quite old, just because we didn’t have any record stores where I’m from. So it’d always be my dad who would buy them when he was travelling, he’d always buy me something. I think my first one was a Spice Girls album? Or Aqua…

Oh yeah, ‘Barbie Girl‘… Not that I knew that…

Eline – But I do remember that my first album I did buy was in London, it was a No Doubt ‘best of’ album.

Looking back on the EP, Standing Barefoot coming out, how long have these songs been in the work? Have they been a long term thing or are these songs fresh?

Gøril – Well as we said, ‘Da Ram’, our single was our first song ever, so the EP is kind of a collection of five songs from different eras of our four years in Liverpool, like moving away from home and everything. There’s one track we wrote literally the day going in to the studio and after writing the songs, we’ve worked with the tracks for about a year now?

So the obvious answer is yes but are you excited for the EP to come out?

What are the plans when the EP comes out? Are there any tour dates coming up?

Lill – We’re going on tour in May but we haven’t announced it yet!

Will there be a show back home, here in Liverpool?

And that’s all you can tell us right now?

I See Rivers single, ‘Da Ram‘ is out now and their debut EP, Standing Barefoot is set to be released on April 21st.