Circa Waves return with their follow-up to 2015’s Young Chasers, a change of direction from the summery first album, Different Creatures sees the Liverpool band venture to darker territory… 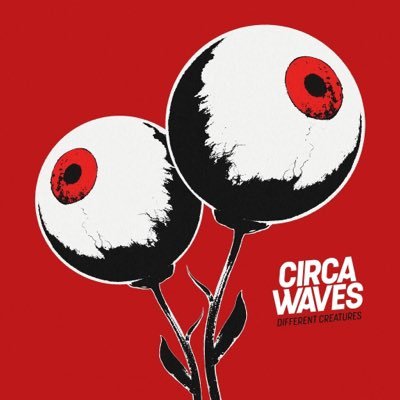 There’s always pressure on a band to follow up a successful debut album and sometimes they crumple under that pressure but for Circa Waves that wasn’t the case, Different Creatures is an ample title for their second record as they show us a different side to them.

The record kicks off with lead single, ‘Wake Up‘ that saw the band return in explosive fashion three months ago. It’s a great opener for Different Creatures, setting the tone for the album with its intense and aggressive set up, gone are the summery vibes, hello to an angrier and in-your-face Circa Waves.

The record is packed with tracks that are going to sound massive when they embark on their tour next week. The songs we’ve already become familiar with in the build up to the release, ‘Wake Up‘ and ‘Fire That Burns‘ showed us what direction the ‘T-Shirt Weather‘ rockers were heading in on this album. What really shines through on this record is the ability the band have to be diverse and reveal a more vulnerable side to themselves than what we saw on the first record.

In a recent interview they discussed how Young Chasers felt like it was an album made for the daytime and that they wanted Different Creatures to be an album for the night and when looking back on this idea, it really comes across that their second record is made for listening to when the sun has gone down.

The local lads provide a few breathers from the intensity the album is filled with, the first coming form ‘Out On My Own‘, although a softer moment, it still isn’t the cheeriness we became familiar with from Circa Waves. A sad tale depicted in the song of loneliness when it feels that doing everything right isn’t enough. The emotion of the song really comes through with the instrumental leading into the final chorus with the yearning guitars tugging on the heartstrings.

Another lighter moment on the record, is when frontman, Kieran Shudall serenades us with just his romantic lyrics and acoustic guitar on ‘Love’s Run Out‘. A simple song of showing his affection to the special one in his life, it’s an intimate and enlightening moment on Different Creatures as he sings to her that “I’ll love you, until my love’s run out…“. The romantic notion of the song is topped up at the end when the mic is still live and Shudall is heard humbly saying “She texted me during that“. A rare point on the record to catch your breath from the whirlwind of high energy and angst that has been focused on so heavily up until this song.

It’s a consistent album, that sees the band deliver nearly all thrillers and no fillers. A good example of this is towards the end of the LP on ‘Without You‘, which matches the opening track, ‘Wake Up‘ with a high tempo but are different when this song gives more of the summery and quirky vibes of their debut album, Young Chasers than the angsty Different Creatures that ‘Without You‘ finds itself on. A song of wanting to be with someone and willing to do what it takes to be with them, the song creates an excitement as you go on this journey with them as the chorus bellows “I will lead this parade and I will travel for days to get to you, and I will never forget your name, and all these days are the same without you…“. It’s a moment of nostalgia as its fast guitars and the fun spirit of the song remind us of why Circa Waves are one of the best bands to come out of Merseyside in recent years.

The album ends on a light note, almost like a reliever from the heaviness that was endured over the 40 minutes of listening to Circa Waves sophomore album. Enjoying the simple things in life and escaping the mundane everyday routines we go through. For the scousers, this is just hanging out with their “old friends” and blowing off steam; “honey do you mind if I go out? Do you mind if I blow off some steam? I wanna talk shit with my old friends…“. ‘Old Friends‘ brings the record to an end in a smile-enducing fashion.

Circa Waves were already held in high regards thanks to their first album but they gave us eleven new reasons to show why we should be excited about them being back on the scene. Shrugging off the pressures of following up a successful debut and showing they’re not a one-trick pony by going in a different direction on Different Creatures but still giving nods to their start that put them on the map just two years ago.

It’s an album filled with so many tracks that were made to be heard live. They’re set to return to Liverpool for a sold out homecoming show on March 24th at Mountford Hall and are also set to make an appearance at HMV in Liverpool One for a meet and greet on this Monday (March 13th).

Songs worth putting on repeat: Wake Up, Fire That Burns, Love’s Run Out, Without You, Old Friends

Different Creatures by Circa Waves is out now.