This morning Glastonbury finally made it official, releasing it’s first line-up poster for this years festival that’s set to take over Worthy Farm from June 22nd till the 26th.The headliners were already unveiled, with Muse, Coldplay and Adele all set to close the Pyramid Stage over the course of the weekend.

Muse stepped in for U2 back in 2010 to headline the festival while Coldplay are returning to Glastonbury to headline it for a fourth time, more than any other band in the festival’s history, while this will be Adele’s first appearance.

Also on the bill, we can catch sets from Alex Turner and Miles Kane, bringing their new The Last Shadow Puppets album, Everything You’ve Come To Expect, along with classics from the first album to Worthy Farm, a place both are no stranger to.

We can also expect to see Band of Horses who have recently been celebrating the tenth anniversary of the release of their stunning debut album, Everything All The Time, as well as announcing they’re set to release a new album titled Why Are you OK?, with a date not set just that it’ll be out this June, just in time for Glastonbury!

Father John Misty, who’ll be playing in Mountford Hall on July 17th will also be at the festival this year.

It’s another spectacular line-up organised by Michael and Emily Eavis and whether you’re lucky enough to be heading down there this year or watching on TV or online, it’s definitely a weekend to get excited for.

Check out the official line up poster below in all it’s glory. 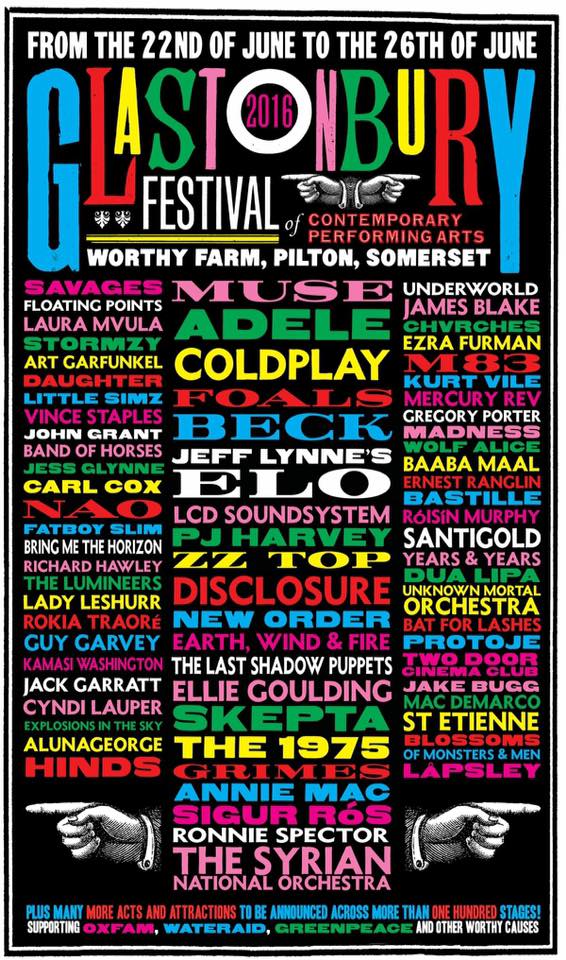