Broody Mancunians The Slow Readers Club, are back with their third album Build A Tower.

The Slow Readers Club are back with their follow up to 2015’s Cavaclade. Already teasing the release of Build A Tower with singles ‘You Opened Up My Heart’ and ‘Through the Shadows’, the anticipation was high to finally get our hands on this album.

Build A Tower begins in every fashion with a slick beat and electro vibe in the opening moments of ‘Lunatic’. It’s packed with a bouncy bass and heavy synths but a beautiful melodious hook adds more depth to the track. Frontman Aaron Starkie, sings about falling into oblivion and trying to find a solution to get out of it. It’s a cool start to the album.

One thing that’s consistent from start to end is the impressive drumming from David Whitworth. Wether it’s on the anthemic ‘You Opened Up My Heart’ or on the swirling instrumental during ‘Lost In Your Gaze’, his skills are a joy to listen to throughout Build A Tower.

The album is beaming with many stand out points, one case being the gloomy ‘On The TV’. With a piercing hook along and rolling beat, it immediately catches your attention. Starkie sings about his harrowing outlook on the world, seeking for a glimmer of positivity but failing. “Now on the TV the world is on fire, we’ve all gone insane… and I wonder will we see tomorrow?” Then a glorious instrumental soars to really invoke the emotion of the song before it closes out with him echoing the chorus repeatedly.

They’ve drawn comparisons over the years to the likes of Editors and you can hear that similarity again on ‘Through The Shadows’. With a luscious melody and the keys adding a harrowing layer to it, there’s a familiarity to it of Editor’s more subdued moments like ‘When Anger Shows’.

Build A Tower is an emotionally charged album, as they lay themselves bare when it comes to relationships and self-reflection. We see their intense side as well, during ‘Not Afraid of the Dark’. The hypnotic hook draws you in from the start and then breaks its spell with a pounding beat and searing guitars on the chorus.

Another big moment on the record is the closing song ‘Distant Memory’. Starkie reminisces of days gone by and makes a statement in saying everyone matters and has an influence on this world. As he sings, the guitar is beautifully played with a gentle beat backing it. As it progresses, he sings for someone to open up and then repeats the song title over and over. When he can’t contain his feelings anymore, the song erupts with a booming bassline and a glorious, soaring guitars and synths as he pours his heart out. It’s a spectacular end to The Slow Readers Club third record.

Their combination of electro twinned with rock is executed brilliantly. Packed with stunning melodies, catchy hooks and mixed emotions, it caters to whatever mood you’re in. Despite the dark themes throughout, you sometimes overlook it and get caught up, dancing to the music.

Songs worth putting on repeat: ‘You Opened Up My Heart’, ‘On The TV’ and ‘Distant Memory’. 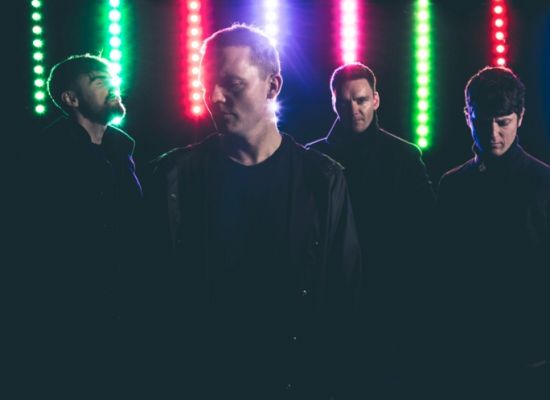 Build A Tower, the third studio album from The Slow Readers Club is out on May 4th.

One thought on “Review: The Slow Readers Club – Build A Tower”