It’s unavoidable and it’s got the whole country’s attention, on June 8th, there’ll be a general election. We’ve been looking at artists who are urging the British nation to get out and register to vote.

Just over a month ago, Prime Minister, Theresa May announced a snap general election will take place on June 8th.

The next general election wasn’t scheduled to take place until May 2020 but the Tory Prime Minister decided to bring it forward. With only two weeks before the British public take to the polling stations, those not registered have only two days to do so in order to vote on June 8th.

So how can someone go about registering?

It’s actually really easy! If you’re 18 or older, all you have to do if you live in England, Scotland or Wales is go to Gov.uk and search “register to vote“, or you can do so now by clicking here. It’s a really easy process and only takes about five minutes to fill out. If you live in Northern Ireland then you have to download the form and hand it in at your Local Electoral Office.

If you’re a British citizen living outside of the U.K., you can still make your vote count on election day. All you have to do is register to vote the same way as someone living in the U.K. by going online to Gov.uk.

How long do I have to register in order to vote on June 8th?

To be registered to vote in time for the election, you don’t have much time. You’ve got until May 22nd, which is this Monday!

1 week left to register to vote! Use your voice, claim your future!

What do I need on voting day?

Once registered, you’ll receive your polling card in the post with details of where to go to vote. The polling card isn’t essential to bring with you, you can still vote without it. If you live in England, Scotland or Wales, you can just turn up, provided you’re registered. However, in Northern Ireland, you do need a form of I.D., any of the following are accepted;

Why should I vote?

Voting is an important part of democracy and can help you and your community have issues raised by the MP you elected to represent your constituency in the Houses of Parliament.

The U.K. are currently in the process of leaving the E.U. and each party have their own plans to make this happen the best way possible for the country. At the centre of each parties manifestos (their outlined plans if elected), they discuss about helping the struggling NHS and reviewing student finance fees for third level education students.

So it’s important that you register and then go and vote, to make sure your voice is heard and you have the party you want leading the country the way you think is best.

Wait a minute, isn’t this a music blog? Why are you talking about politics?

Yes, JACKS is a music blog and we love what we write about here but the general election is at the forefront of everyone’s mind! From The Maccabees, to Wolf Alice and Foals frontman, Yannis Philippakis, all have stressed how important it is to vote.

There’s only one week left to register to vote, have a say on your future! Register now https://t.co/NkkPoUavvQ #YourVoteMatters pic.twitter.com/62q8LdlNYh

Plus, music and politics have a long and intense history, from the emergence of punk in the 70s, to Rage Against The Machine refusing to do what they’re told. There’s also Liverpool’s own, John Lennon who was never afraid to voice his opinion on current affairs back in the day.

Who should I vote for?

Well we can’t tell you who to vote for but each party are releasing their manifestos ahead of the general election, filled with detailed accounts of their plans upon being elected. Click below to access the following parties manifestos to help decide who you should vote for.

Get out and vote, kids!

Your vote matters and the future of the country is in our hands once again. It appears that between the ages of 18 to 24, only 35% were registered or turned out to vote during last year’s referendum on wether Britain should stay or leave the E.U. All parties have agreed that this was a low figure and it’s crucial that if you are old enough to vote, then register and make your voice be heard in the upcoming general election.

So go and register before May 22nd by visiting Gov.uk and make a difference on June 8th! 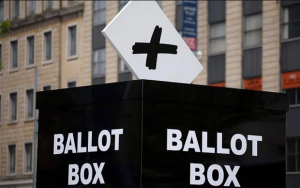