It’s been a week since the announcement from Liverpool Calling, who bolstered their line-up and added a new element to their festival too. So JACKS caught up with the co-organiser, Andy Gilbert to talk about Liverpool Calling…

This year’s line up features Coasts, Spector, Yak and a lot more at Camp and Furnace on July 9th. So I took the opportunity to ask Andy questions all about Liverpool Calling, from the line up, to planning, to favourite memories…

You’ve got an exciting line up on your hands, with Coasts, Spector, Yak and October Drift set to play, just naming a few. As these bands started to agree to play, how did it feel when looking at the line up growing, seeing the quality of bands all due to take part at this year’s festival?

“There’s a great sense of pride when you finally get that “yes” from the booking agent. It’s great to see the festival grow itself, more top bands adding to your alumni of artists who have performed at the event. We lost a few months planning because we didn’t know what was happening with the venue, so it was a relief as well that we managed to still put something cool together.“

What’s the response been like so far to this year’s line-up?

“We’ve had a fantastic response. As much as it’s exciting to show people the line-up, we still get nervous because we want everyone to like it as much as we do. Obviously, you can’t please everyone.

The line-up is quite different to recent years, so for that we were a bit apprehensive on the response it would get, but it was something we had to do. We needed to take a much fresher approach to the line-up and we found it more fun in a way stacking the line-up with up and coming new artists. We were delighted to see the positive comments when it was announced and most importantly, people buying their tickets which is what we live and die on.“

You’ve brought a whole new element to the festival this year, with a stage dedicated purely to acoustic music. What gave you the idea for this?

“Every year we try and think of some new things that can bring a different dynamic to the festival. We were having a look round the Camp and Furnace and we were at the outside area and we thought it would be cool to put a little stage on out there.

People regularly venture outdoors at the events to sit down and relax for a bit, so we thought why not give them some music to enjoy out there too?! We get a lot of applications from so many great acoustic artists too and it’s always difficult to fit them in, so we thought it’s a good opportunity to put them all on their own stage as well.

In previous years, Liverpool Acoustic have curated an acoustic stage for us in Sound Food and Drink so we were over the moon when we found out Camp and Furnace had a perfect space for this kind of line up.“

Who are you most looking forward to watching on the acoustic stage?

“Ellie Rose Smith played last year and received a lot of great reviews and we’re excited to have her back. Michael Bennett has always been so supportive of the event and is so passionate in what he does; his set is always great to watch too.“

Check out a taster of what Ellie Rose Smith can bring to the acoustic stage with the trailer below for her EP Life Is Good.

“I’m a massive fan of Spector, I’ve seen them live about 11 times and met them on a couple of occasions too. I think it will be a really good party atmosphere when they’re on. Yak are a band

I’ve recently got in to, they will bring something different to the festival.

I’ll have to give a shout to SPQR though. They are a fairly new local band, who my co-organiser got me in to. We hosted a night with Bido Lito last month and put SPQR on and I fell in love with them.“

Liverpool Calling is boasting a lot of really good artists on the line up this year but just how important are local artists to the festival?

“In theory, the local bands are what it’s all about. We take great pride in giving these bands a platform to showcase their music. We really hope they benefit from their set, not just because they’re performing to [we hope] a big crowd, but with all the touring artists performing, the managers and reviewers there too, you never know who’s watching.

As long as they’ve had a great time and they’ve gained a few new fans than its massive step in the right direction for them. Liverpool is currently boasting a huge talent pool so it would be a crime not to dip into it and highlight some of the immense talent from around the city.“

To those that have never been to Liverpool Calling before, how would you describe it to them?

“This year might be different with it being in the Camp and Furnace, past reviewers have used words such as “special” which is flattering to hear. The event attracts people of all ages and backgrounds which is the best thing about it for me. It’s a great day where you can not only see some great bands in special venues but discover some new artists in the making too.“

The Bombed Out Church is the centre-piece of the festival, so-to-say. How long will it take to get it ready in time for July 9th?

“Unfortunately we can’t use the Bombed Out Church this year, we’ve had to relocate from our spiritual home and move to the Camp and Furnace, which is still a great venue and we are excited to use.

Camp and Furnace have been great, letting us use the space and a lot of equipment, still lots to do before the big day though!“

Can we expect any more announcements in the near future?

“That’s most likely it now. We are always talking to record labels who are sometimes interested in showcasing some their bands which are always open to but nothing’s set in stone yet. The main line-up is out there now though.“

Finally, what’s been your favourite Liverpool Calling memory since the festival began?

“The first year when British Sea Power entered the stage and started with “Machineries of Joy” was a very special moment. It’s not only a band I love, but it’s the first major band we booked, and the first ever headline act at Liverpool Calling. I was extremely nervous that day for obvious reasons; I had never worked with a touring artist before, and didn’t even anticipate how big the day was going to be. British Sea Power not only put on a great show, unleashing polar bears in to the crowd but they were great to have around backstage.

Last year, seeing the whole crowd bouncing up and down, going crazy to Reverend and The Makers was amazing to witness as well.“

Liverpool Calling takes place on June 9th in a new venue of Camp and Furnace, amongst other venues in the city too. Tickets are on sale now for £20, exclusively from SeeTickets.com, which can be bough by clicking here.

Check out the line up poster below. 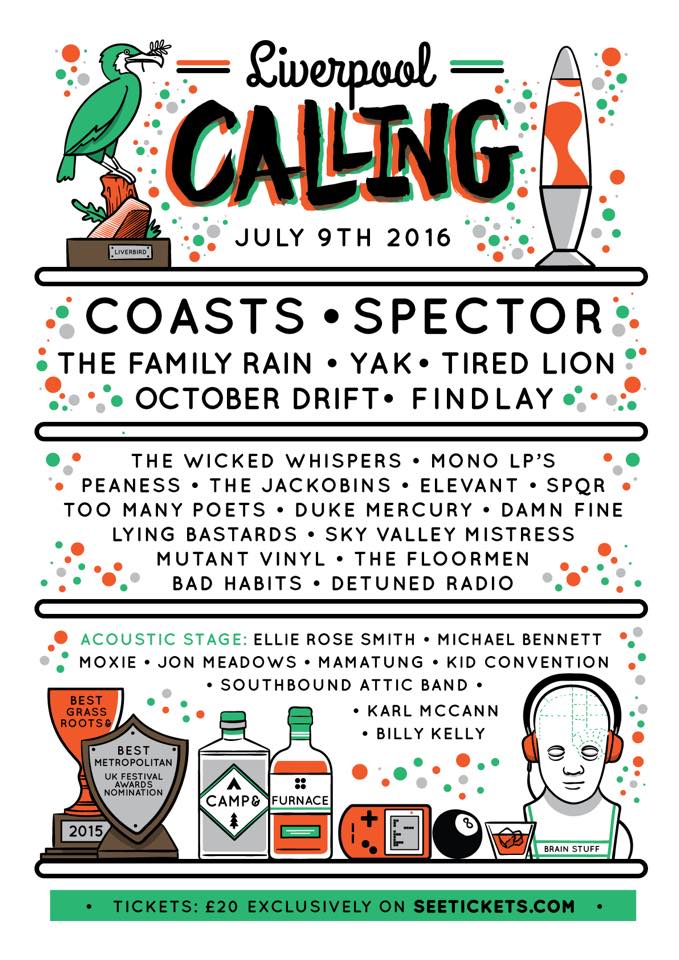